A 17th Century Guide to Beauty in Virginia

still courting the moon, the silver creek
of the Milky Way glinting

above the Rappahannock River
in a fist of flung shillings –

come, dip your face
to the dew, each drop its own

loose change, waiting
to be slipped into the charity box of dawn.

Spend them liberally, soaking your cheeks
in the tears of your not-yet-country –

till, with a great stirring of snuff-dark breath
the sightless eyes of the household

blink awake, and the sun begins again
its daily scouring of the soil beneath tobacco leaves.

All day the plants will stake their hard
aromas to your brow, your unwashed palms.

All day you will catch your tongue
lamenting, reimbursing their murmuring aubade.

‘A 17th Century Guide to Beauty in Virginia’ was a finalist in the 2019 PBS/Mslexia Women’s Poetry Competition.

A post about anxiety, cultivating creativity, and online resources for writers.

Three weeks ago, after passing through three major international airports in my attempt to get home from the Falkland Islands, I went into two-week self-isolation. Except that it doesn’t feel like three weeks ago. It feels like two days – and also about seventeen years. I don’t know whether anyone else has experienced this, but for me, time seems to be in limbo. The days just roll over one another, and it would be far too easy to spend them all staring into space, or at a screen, or at the birds in the garden. (NB: I have definitely done all of these things since lockdown began.)

Let’s start by saying that this wasn’t the post I was expecting to write for today. The one I’d scheduled was an update on how travelling for multiple consecutive weeks was affecting my writing process.

Obviously, I’m not currently travelling. I got about halfway through my epic trip (Argentina, Uruguay, Antarctica, South Georgia, the Falkland Islands, and Australia), before coming home. In fact, I was en route to Melbourne when Australia closed its borders, and I had to spend a frantic hour at Dubai airport, trying to persuade the Emirates airline staff to put me on a flight back to Manchester instead. (Luckily, they did – and when the lovely woman at the desk handed me the ticket, I actually burst into tears. But that’s another story.)

Right now I should have been in the middle of a 3-week writing residency at the KSP Writers’ Centre, in Perth. Part of me wanted to host my own in-isolation residency at home. After all – I don’t have to go anywhere, and isn’t that one of the joys of a writing residency? But I’ve also been finding it difficult to focus over the past few weeks. Which begs the question:

Should I be using this lockdown time to write?

I’ve seen countless posts about this on twitter. People saying that the lockdown represents ‘ideal writing conditions’. People saying how much writing they’ve managed to accomplish now they’re not having to go to work. People commenting how they’re finding it impossible to write right now. People despairing that suddenly stories hold no interest for them any more, as how can fiction compete with our current reality? People clinging to stories and poems as lifelines.

In short: there is no right answer.

There was an excellent Anne Enright quotation doing the rounds on twitter a while ago, from an article in the Guardian:

‘Honestly, there is a lot to be said for tooling about all day, looking up recipes and not making them, not bothering to paint the living room and failing to write a novel. In the middle of the messy non-event called your mid-afternoon, you might get something – a thought to jot down, a good paragraph, a piece of gossip to text a pal. Boredom is a productive state so long as you don’t let it go sour on you. Try not to confuse the urge to get something done with the idea that you are useless. Try not to confuse the urge to contact someone with the thought that you are unloved. Do the thing or don’t do it. Either is fine.’

So let’s talk about solitude.

As writers, we often crave solitude. That time away from work colleagues or family or friends, where we can just be on our own, inside our own head, to write. Some of us travel hundreds of miles to go on residencies, just to get some of this solitude. Some of us usually find it in a public park, or in the middle of a crowded café.

Because solitude isn’t necessarily the same as being alone.

As Anne Enright says: ‘Boredom is a productive state so long as you don’t let it go sour on you.’ And solitude is a kind of boredom. It’s a state of mind that writers can spend years learning to cultivate. It isn’t just sitting on your own at a desk, with nothing else you’re supposed to be doing. It’s a way of shutting off the critical part of your brain, to make room for the creative bit. It’s sitting with the door open and waiting for the ideas and thoughts and words to arrive. It’s an active and a passive state at the same time. Solitude, the way a writer needs solitude, is a way of being alone with the universe.

And it’s difficult to make room for creativity, when your head is full of external anxious thoughts.

I mean anxiety with both a capital and a lower case ‘a’. Because these times are tough. All the clichés that have arisen over the past few weeks are true: this isn’t normal; these are difficult times; the world is upside down; it’s too big to process; we just have to get through this day by day.

There are times, sitting at my kitchen table with my notebook open and a pen in my hand, that I could almost imagine there’s nothing untoward happening outside my own four walls. There are days when I’m bored – in both the positive, creative, Anne Enright sense of the word, and in the listless, sour sense of it. And yes, I cultivate both of these. Because if I didn’t, I couldn’t cope.

At the time of writing this, the UK death toll has almost reached 10,000. And that’s just the figures for hospitals – it doesn’t include all those people who’ve died at home or in care homes. Hospital staff and other key workers are going without adequate PPE. There are thousands of people who won’t get proper funerals. Who are dying alone, their loved ones having to say goodbye over skype. There are nurses sitting with dying patients, holding their hands, to stop them from dying alone.

When I think about all of this, I freeze up. It’s too much for my brain to handle. Possible, reading this, you’ll see this as me turning a blind eye. As choosing to live in my own (honestly quite beautiful) bubble, of sunny Cumbrian walks, and baking banana bread, and reading books. And yes, of course I choose that. When choosing between a meadow and the abyss, who on earth would elect to fall?

That doesn’t mean I don’t care. But I know what anxiety feels like (big and small ‘a’). I recognise those heart palpitations. The sweats. The sick feeling. The vertigo from looking over the cliff-edge inside your brain. Even writing this post has got me feeling all of that, feeling dangerously close to the edge. And if I let myself get stuck in those thought-cycles, I’ll be no use to anyone.

So I steer myself away. I try to read, when I can focus on it. On better days, I try to write. I bake. I make soup. I get in shopping for my parents. And, sometimes, I try to avoid looking at the news. 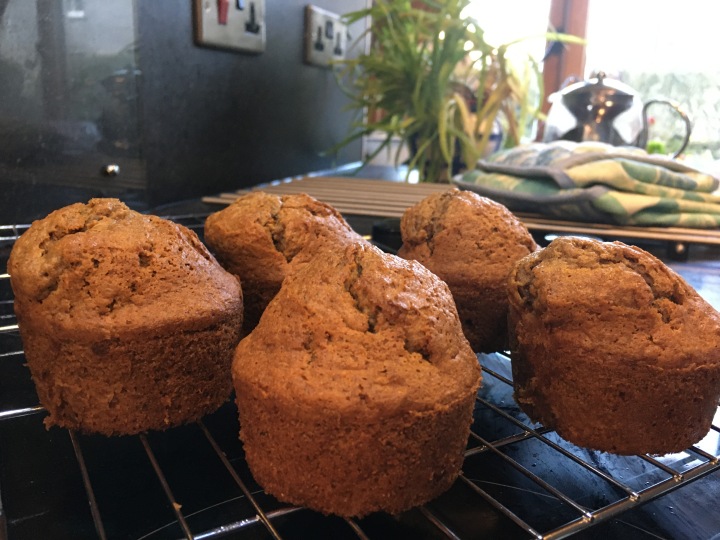 So how is my writing going with all of this?

Of my first three weeks in isolation, I spent the first one writing absolutely nothing. I figured that was fair enough. I’d just come back from a massive round-the-world (or half-way-round-the-world-and-then-suddenly-home) trip. I was still jet-lagged, not to mention just generally tired. I needed time to adjust to what I keep seeing referred to as ‘the new normal’. And, to top it all, I had an exhausting cough that may or may not have been coronavirus. I gave myself the week off.

During week two, I also wrote very little – though I did find a way to ease myself back into creativity: Tania Hershman’s Arvon Short Story Challenge. The challenge consisted of five daily prompts, each designed to help you into writing a short story. What worked for me was that the prompts themselves only took about 20 minutes each, so I could do them without feeling like there was great pressure to spend hours in a state of focus, or to write something meaningful. It was like doing physiotherapy exercises after an injury, working a muscle back into life.

I did write a short story from the exercises. It took me two weeks, rather than one, but that doesn’t matter. The point is, the exercises opened a door.

That doesn’t mean that everything’s back to normal. There’s still that difficulty in focusing, and I’m still tired a lot of the time. (I don’t know if this is a hangover from the maybe-coronavirus cough, or just a reflection on my constant state of low-level anxiety.) But I’m managing to think about writing, and to write little bits. I’ve made a promise to myself that, during the weekdays of what would have been my Perth residency, I’m going to write something every day. It doesn’t have to be a lot. One day last week, I wrote 200 words, and I’m counting that as a success. The important thing for me right now isn’t volume – it’s keeping the engine running.

I’m currently working at between half and two thirds of my usual capacity – less for the creative stuff, but more for the practical and administrative side of things, which tends to require less head-space. Also, apart from writing this post, I took a full two-day weekend this week, and honestly it’s made a world of difference. I hardly ever do this, and this weekend has made me realise that I ought to do it more often. After all, writing is work, and it isn’t good for us to work 24/7.

So all in all, I’m doing surprisingly ok. Blips here and there of course, but getting through each day as it comes, and managing to think creatively, which is what I hold onto.

Stay safe & well – and happy writing, or not-writing, or whatever you choose to do with these lockdown days.