‘A woman must have money and a room of her own if she is to write fiction.’
– Virginia Woolf

I’ve recently come home from seven weeks away from my own regular writing room (read: my kitchen table). During that time, away from my normal routine and my habitual space, I’ve been thinking a lot about what I need in order to write. What are the circumstances that help me, the magical ingredients that go into the mix for creating inspiration?

During my 7 weeks away, about 2.5 of those weeks were spent actively on the road, never in one place for more than a couple of nights. Three of those weeks were spent on a residency at MacDowell Colony, and the rest was spent researching in New York Public Library. The writing circumstances across these weeks were about as varied as I could have asked for over the course of a single trip. And most of the time, I still managed to write.

Ok, so the amount that I wrote varied drastically. As you’d expect, I wrote far more during my three week residency than I did the rest of the trip – but I’m not sure this was entirely about having a room of my own (although my little cabin in the woods was undoubtedly wonderful). I think it was more to do with having the dedicated time for writing, and (that magical ingredient) headspace.

(Let me just make a caveat here: all of the time I was away was technically ‘poetry time’. Even when I wasn’t at MacDowell, I was either at a poetry festival, or in London for a poetry event, or actively dedicating research time to my current poetry project.)

So, building on all of that, what are five things I’ve come to realise about writing on the move? 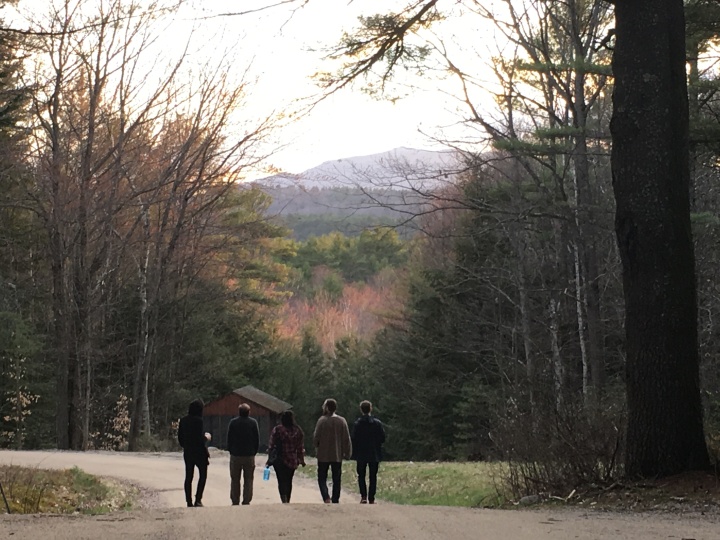 1 – Writing on the move is just like writing at home

Every writer is different. Consequently, every writer’s process is also different, which means that every writer will require something different in order to feel at their most creative – whether this is nothing more than a stub of pencil and the back of an envelope, or a chaise longue and fourteen daiquiris mixed by a six-foot albino wearing a penguin suit and stilettos. (That isn’t my rider, I promise. Maybe it should be?)

The trick, I found, was to create the same circumstances for writing while I was away that I would normally create at home. For me, this is a quiet space (with plenty of natural light if possible), a notebook and a pen. It’s also about finding a time when I know I’m not going to be interrupted by anything or by anyone.

At home, I need to consciously carve out these occasions from the rest of my life. It’s all too easy to let admin and emails swamp the entire working day, then to get to the end of the week and realise I haven’t done any writing whatsoever. In order to make sure that doesn’t happen, I have to put in the effort. I have to set aside time for the writing.

On the road, it’s no different. I just have to decide that I’m going to get up an hour earlier, so I can write with a morning coffee. Or decide not to browse Twitter for the river crossing on the car ferry, but instead to use that fifteen minutes as dedicated free writing time. Or I have to set aside an hour for a coffee break, during which I work on a poem. The dedication needed is exactly the same.

When I was a student, I used to write whenever I could grab a spare moment. Now, I like to lean a bit more into a routine. Ok, so maybe ‘routine’ is the wrong word, as that can vary at a moment’s notice. But I do understand the ways of putting my day together, so that I can choose the optimum time for writing.

When I’m on the moving, all that changes. I found myself aiming to write in the evenings, between dinner and bed time. Normally, this could be quite a productive time slot for me, but what I learned is that this doesn’t work if it follows on from six hours of driving, for example. This might sound obvious, but it quickly became something to factor into my planning. Instead, I ended up stopping en route for coffee towards the start of the day, so that I could write before my brain become too befuddled by all that travelling.

Instead of writing in the privacy of my own motel room, I ended up writing more in public spaces: coffee shops during the latter part of my trip, and, during the first part of the trip, New York Public Library.

Which brings me onto… 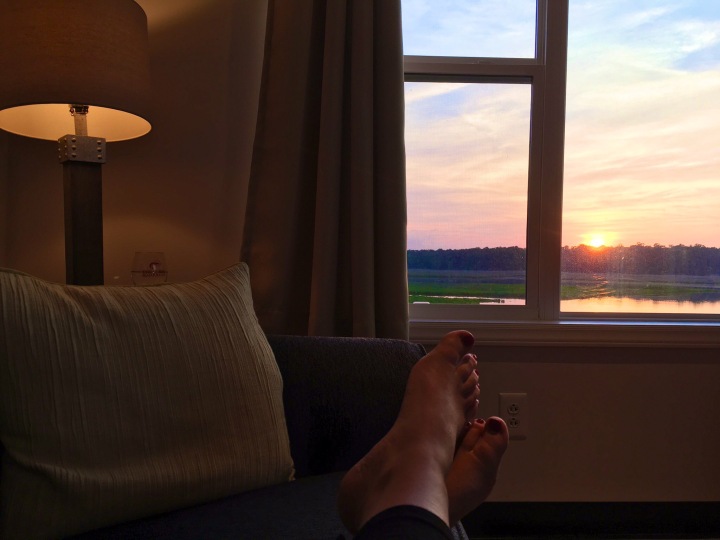 Unsurprisingly, the spaces I was writing in changed while I was away. In some ways this is obvious: I couldn’t write at my kitchen table because my kitchen (and the table) was a six hour flight away. So I had to think practically about what sort of space I need in order to write.

While I was at MacDowell, this obviously wasn’t a problem. In fact, it was an idyllic situation, as every day I could walk to my dedicated little cabin in the woods and write to my heart’s content, and where the only disruption to my day was when I had to get up to go outside and see if my picnic basket had been delivered yet for lunch.

But on the road, writing space needed more consideration.

What I found was that I can write in public spaces almost as easily as I can write in private spaces, given the odd caveat – such as nobody reading over my shoulder. I’m also not great with places that play music, particularly if that music has lyrics. I find myself listening to the words or the music instead of listening to myself thinking. Some sort of table (at table-height, rather than a sofa with a coffee table). Coffee helps, but is not essential. Ideally, nobody else there that I know – there’s something about anonymity in a space that helps with writing.

And that’s pretty much it. It turns out that I’m not nearly as picky about writing space as I thought I was. And it took travelling to the other side of the world for me to learn that.

(Of course, now that I’m back at home, I do still love working at my kitchen table. One of the downsides of writing in a coffee shop or a library is that you can’t really read your words aloud to yourself without getting funny looks…)

So far, I’ve talked a bit about the limitations of writing on the move, and how I needed to adapt my writing style to the travelling lifestyle. But of course there are positive sides to it as well. The whole reason I went to the US in the first place was one of these positive sides: to research a poetry collection in the places where parts of it are set.

But travelling can also allow for unexpected inspiration. For me, that’s one of the best aspects of travelling. I’ve written multiple poems that I know would never have existed if it weren’t for travel. Which makes sense: life filters into art, and when we travel we’re more alert to life going on around us. We’re in a place, and often a culture, that we’re not entirely used to, and this makes us pay attention. And, of course, paying attention is exactly what provides quality material for writing.

I rarely write complete poems when I’m travelling – although because of the specific poetry focus of this trip, I did end up writing a few complete drafts of poems while I was away this time. But more often, the travels will filter into the poems once I’m back: my experience percolating through my brain till they drip quite naturally into whatever poem is waiting to receive them.

Either way, writing or thinking about writing while on the move is a great way to inject some variety and freshness into the work.

Last, but not least, I learned to be aware of my own limitations. This is probably something I need to think about in my life at home as well, but especially on the road – it’s so easy to create a plan for everything you want to write or to work on, and forget that, when you’re away, things take longer. I mean, getting from place to place always takes longer than the satnav says it will, because it doesn’t factor in stopping, or your slightly slower opposite-side-of-the-road driving pace, or getting lost. Getting fuel takes longer. Doing laundry takes longer.

As well as taking loner, all of these things take more energy, because you’re having to think about them a bit harder. Example: I went to buy shampoo, and whereas at home I would walk into the shop, pick my regular shampoo off the shelf and pay (all in the space of about three minutes), in America, I had to first work out which shop to go to, and then look at all the different brands and prices, and then work out the tax, and all the rest of it. Everything just takes that little bit more time and energy to figure out.

All of this is good in some ways, of course, as it feeds into Point 4, and that added alertness we have when we’re out of familiar territory. But what it does mean is that I had to manage my expectations as to how much I was going to write in a day. With the exception of the MacDowell residency, where I wrote way more than I expected, I generally wrote less while I was away than I would have done at home. But that’s ok. After all, it isn’t all about quantity – and the research and additional stimulation enabled by being abroad was, without a doubt, priceless.