The aim was never really to succeed in all of these things, or even to succeed in as many as possible (although I did hope that this might be a pleasant side-effect). Instead, it was about getting my work out and getting my name known. It was about forging connections. It was also about creating some sort of transparency around just how difficult it is to make it as a writer, and how often a thanks-but-no-thanks response is all we get to show for our troubles.

Well for a start-off, I didn’t quite manage 100 – although I did come pretty close. I managed 87 submissions / applications / entries. Of these, the majority were to competitions, closely followed by residencies.

The breakdown of these 87 submissions:

Or, for those of you who like things in percentages and pie charts:

It might not have been the 100 submissions I was originally aiming for, but I think 87 provides a large enough pool of data to get some sort of idea of statistics for positive returns on submissions.

As you might expect, some months I submitted more things than others. January was by far and away the most productive month – which makes sense, when you think about it. January is generally when we’re best at sticking to all our new resolutions, only for them to taper off when February comes around. Plus, January has all of that lovely time in the first few days of the year, when you’re just lazing around after Christmas, looking for some time to fill with an application or two.

As for the end of the year – well, there was a pretty good reason for making fewer applications towards the end of the year: namely, that by then I’d had enough successes that my diary was starting to look pretty full! Which, as far as I’m concerned, makes the whole endeavour a success in and of itself.

So how many successes does it take to count the year as a success?

Well, here’s my breakdown of responses to my 2018 submissions / applications etc:

* ‘Partial success’ I defined as anything that was a positive outcome, but without receiving a full prize. For example, ‘commended’ in competitions, or submissions that were a ‘no’ but then led on to something else. 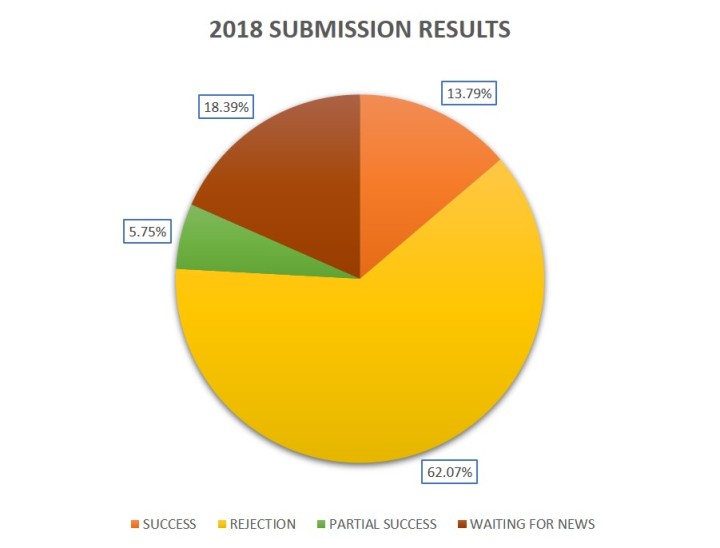 What do all these graphs & numbers mean?

Well, you can see from the pie chart above that the outcome of these submissions was overwhelmingly rejection: the big yellow segment. (Though if you want to think more positively, there’s a great article here from Aki Schilz at The Literary Consultancy, on redefining creative success, and the problems with using the word ‘rejection’.)

So what proportion of these submissions resulted in some sort of success, full or partial? So far, 17 out of 87 – or around 19.5%. That’s roughly 1 in 5, which actually isn’t bad odds. Maybe, then, it’s all about how we frame things.

For instance, if I told you that I received 54 rejections last year, it’d sound pretty pitiable. You’d be all ready to bemoan the unfortunate life of the oft-rejected writer, and honestly, who can blame you? That’s more than one rejection per week, which officially means that in 2018 I received rejections more often than I remembered to put the bins out.

But then, when I say that 1 in every 5 of my applications / submissions was successful… Well, that sounds much better. Suddenly, being a writer sounds frankly quite a bouyant lifestyle.

The problem? These acceptances & rejections don’t spread themselves out in a nice easy pattern. You don’t get 4 rejections one month, followed by a nice acceptance, followed by another 4 rejections the following month, but then another acceptance to perk your spirits up. Instead, they come in waves. Which means you might get an unbelievable frenzy of 3 or 4 acceptances back-to-back, making you feel you’re on top of the world – but you might have really needed that frenzy after several months of wall-to-wall rejections.

I’ll write more about dealing with these periods of rejection in a future post, because I think that it deserves much more space than I can give it here. For now, I just want to say: take heart. This post has always been about providing transparency about just how much so-called ‘rejection’ a writer has to take, and why it isn’t all book launches and prizegivings. If you’re receiving lots of thanks-but-no-thanks responses, then don’t worry. You’re not the only one.

Ok, so what do all these numbers actually mean?

Honestly? They don’t really mean anything. I know, I know – I’ve made you sit through a whole blog post (well done if you made it this far without scrolling!) and now I’m telling you it was all worthless? Well, sort of, but not quite.

Because the numbers are an accurate representation of acceptance:rejection ratios (1:4), and they are an indication of just how many rejections a writer can receive in a year. But every writer’s ratio is going to be different, depending on where they are in their career, on what sort of things they’re submitting to, on how hard they work on their craft or on the applications themselves. In the same way, the number of rejections each writer receives is going to be different, depending on how often they’re sending work out or submitting applications. These are only my numbers for one particular year.

And the plot twist at the end of the post?

These graphs and charts and numbers are only part of the picture. As well as the things I actively applied to / submitted for, there are the successes that found their way into my inbox through word of mouth, or through other literary connections – successes such as the commissions and the workshops and the festivals.

So yes, there were a lot of rejections. 54 of them, to be exact. But there were also a lot of things to celebrate – which, at the start of a new determined year, is what we should probably focus on after all.