There are good weeks, and there are bad weeks. This week has probably been a bad week.

What can I say? Sometimes, no matter how hard you work at getting words on the page, what you produce just isn’t right. This week has been one of those.

But, as today is Sunday and Monday is all about starting the ball rolling again, I’m determined that next week will be much more productive. (She says, trying not to look at the appointment-packed week ahead of her…)

In other news, tonight I watched the series finale of Dickensian. (IF YOU DON’T WANT SPOILERS, STOP READING NOW!)

Have to say, I was quite disappointed in it. My favourite thing about the show (apart from Tom Weston-Jones, who, by the way, I’ve recently discovered is a fellow Royal Holloway graduate) is the concept of putting all of Dickens’ fantastic characters into a big melting pot and letting them bump up against one another, to who knows what ends? A mixing together of novels to create a new plot entirely: something that the Jacob Marley murder investigation was a brilliant tool for.

Unfortunately, with the murderer identified, the characters seem to have not only retreated back into their own books, but also to be following their own plot-lines.

Not letting Little Nell die earlier on in the series felt like a promise that the stories wouldn’t come to their expected conclusions, yet now at the end of series one, we’re left with Miss Haversham abandoned on her wedding day, refusing to take off the wedding dress or let anyone touch the cake. Big surprise. Oh, and what have they done to set us up for the next series? Showed us Scrooge about to be haunted, and Oliver hanging out with the Artful Dodger. Not exactly what I’d call an original plot…

Don’t get me wrong, though, I’ll still watch it if/when it returns to the screens, if only so I can desperately hope that they haven’t completely done away with Tom Weston-Jones!

But enough Dickens. It’s also been a week where I’ve rediscovered my love of jigsaw puzzles and read a couple of books:

Reading-wise, it’s been very First World War-based this week. Hidden Stories of the First World War is a library book, as, yes, I’m very proud to say that I have got back into the habit of taking books out of my local library. Particularly references books. Novels, poetry and plays I tend to get attached to, and want to go back to time and again, so I like to have copies on my shelves.

One book that I’ve revisited a number of times is Pat Barker’s Regeneration. I’ve actually lost count of the number of times I’ve read it (I think 7, although it may just be 6). Re-reading it this week, I realised that it may have, very quietly and without me noticing, become one of my favourite books. It’s just such a good mixture of plot, characters, history, poetry and good writing. I’m sure I’ll end up re-reading it again at some point.

The week in pictures:

Doing a jigsaw puzzle with my parents

I like this quote. Takes the pressure off a bit. 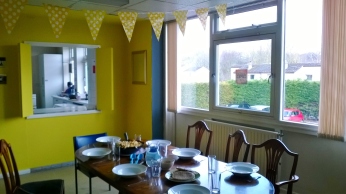 Here’s to a much more positive week ahead!