[Theatre by the Lake, Keswick]

It isn’t often that a play can make you laugh and cry simultaneously. Alan Bennett manages it. So does Brendan Murray. 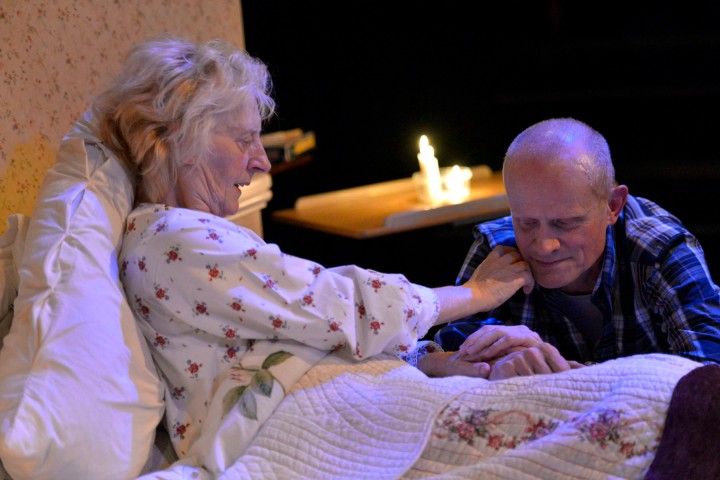 At first, Seeing The Lights is a seemingly light and casual play about family disputes. At its heart, however, it is emotional and highly charged.

As an ill (and possibly dying) old woman prepares for her birthday, the only present she wants is for the whole family to be together to visit the Blackpool Illuminations like they used to. But one of her children is half the world away in Australia, and the two closer to home are far from united. In the confined setting of a northern terraced house, frictions intensify and old rifts widen.

The Theatre by the Lake’s programme describes the play as a comedy, which is largely accurate. However, Murray’s quirky dialogue often catches you unawares, and a surprising turn of phrase can tip the balance between comedy and heart-wrenching sadness – all the more heart-wrenching because of the intimate domesticity of director Stefan Escreet’s production in the Studio Theatre.

The two rooms that make up Anna Pilcher Dunn’s set are recognisably unremarkable, while Laura Cox’s portrayal of the central character, known only as ‘Mum’, feels like the sort of person you would probably know. In fact, the whole family dynamic at times feels uncomfortably familiar.

Terry (James Duke), the son-turned-carer, is at once universal and surprising, witty and tender. Although Seeing The Lights is very much an ensemble production, for me it was Duke’s honest acting and complex emotion towards Mum that carried the play, and it was for him that I rooted in the warzone of family life.

However, some pity also has to be felt for the children’s partners, Ray (Chris Hannon) and Nasir (Alan Suri) – both in their own way caught between two warring camps. Characters who could so easily have become passive and helpless instead provided just enough resistance to the formidable yet vulnerable Muna (Rebecca Todd), to enable the complex and shifting family dynamic that drives the entire plot.

It is also what makes Brendan Murray’s play a mirror in which we can see the fraught complexities of any family. At least, I know I can see mine.